After 5 years of fundraising and now working in co-operation with Christian Solidarity International (who support educational project in East Africa) the pilot project – co-financed by the Luxembourg government began on Monday 22nd August to prepare the land for the building of Sunflower Primary School. Berit, Edson, IOP heads of departments, 5 Luxembourg volunteers together with other volunteers walked around the perimeter of the site which is situated on the hill between Sollerud Kindergarten and the Lords Hill High School.

Evie, Lena and Etienne, 3 Luxembourg students dug the first hole and the work began. They all tried digging but as the earth was so hard and full of rocks and thistles, the bulldozer owning company was contracted to do the work! In only one day all the rocks were removed and now come the slightly longer task of leveling the ground.

The school is an English medium and uses Montessori Methodology in teaching and learning. Completion of the school construction is expected to be in 2019. Thanks to all partners and donors for the works. They are fulfilling one of the important strategic objectives within IOP in its efforts to provide quality education to the Tanzanian Community! 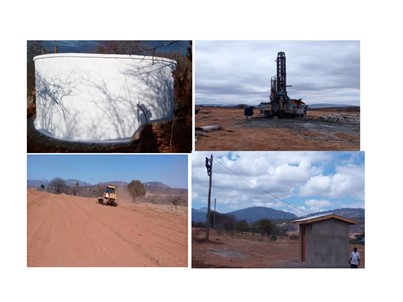 On the 16th of January, 2018, IOP had an opening party of Sunflower Pre and Primary School. The IOP Luxembourg delegation was here to attend this joyful event. There was singing, and dancing to celebrate the opening of the school.  Under the school motto “The child is both a hope and a promise for mankind kind”, a quote by Maria Montessori. It was a great moment to celebrate the important event within the IOP Community and the kids who were at the Sollerud Kindergarten Tanzania.

The school construction was completed in September 2019 with fourteen classrooms, Administration Block, two hostels and one hall. Teachers will be able to welcome up to five hundred sixty children from standard one to standard seven.

The School has been founded throughout seven years by the selling of thousands of cookies, baked by the children of the Montessori schools of Luxembourg. Also the Alizeti band, which means Sunflower in Swahili, of which Helen Clarke, the president of IOP Luxembourg, is a member of, donated the revenue from their concerts. In the process of collecting money, the project will be finished by the significant co-funding by the Luxembourg government with the co-operation of Christian Society International (CSI). Without the generosity of the Luxembourgish people, the project would not be at the stage it is now. Special thanks to IOP Luxembourg, CSI and Luxembourg Government.

REGISTRATION OF THE SCHOOL

IOP Management thanks all individuals who made this a success. The work ahead of us is helping children get an appropriate knowledge.

Welcome and let your Child Learn by himself or herself